Barry started playing guitar and keys in the early ’90s, closely followed by the harmonica after he heard one played in the Doctor Who episode “The Happiness Patrol”. He worked up his chops playing a lot of classic blues by artists such as the Muddy Waters Band and Howlin’ Wolf, mixed in with a healthy dose of ’60s, ’70s and ’90s pop/rock. 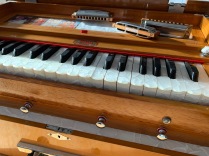 Barry has been playing the harmonium since 2006 after being inspired to play while attending Devon School of Yoga teacher training and Santosa Yoga and Bhakti camps. Having had some keyboard lessons as a teenager was a helpful start, and then he gained experience playing kirtan at yoga festivals and in yoga studios.

Barry has many years experience playing at blues and folk clubs, festivals, concerts and private events. He leads a kirtan mantra band which has been playing yoga festivals and concerts for over a decade, and also plays in the Cornwall-based ’60s cover band The Hurdy Gurdies. He works as a trustee and the magazine editor for the charity HarmonicaUK.

Barry offers beginners lessons in harmonica and harmonium to students able to travel to North Cornwall, or via Skype/Zoom. If you are interested in learning either instrument please get in touch: barry [at] elmsgrove.com (change [at] for @ before sending)